This beautiful song has a peaceful and serene vibe to it, one that inspires with it’s lingering melody and inspirational lyrics. This song reminds me of so many simple yet lovely/amazing things in life, and I can visualize the tone, feeling, & mood of what Frankie Beverly is describing in the song. The overall composition is timeless, and although this song was made in 1978, it is still modern/current, very relevant and positive.

Of course, it is normal and common for people to have already engaged in sexual activity before they are well into their twenties. However, deciding to be abstinent and remain a virgin after adolescent/teen years is a choice that can often have an awkward phase/stage at certain points & times in life. Personally speaking, although I still do not regret my decision to not engage in sexual activity now, there was a time when I did feel awkward & from the ”outside looking in” in relation to some of my peers’ experiences. Now, in the present I am comfortable and at peace with my decision and here are a few encouraging words for people who are abstinent/waiting for whatever reason & who may feel awkward, uncomfortable, or aberrant. Not an overcritical perspective, just positivity, encouraging confidence, and inner peace from a personal point of view.

Here are some of my favorite notable and emerging artists who have created astonishing and interesting expressions/work of arts. The collection includes Reuben Dangoor, Hayden Zezula (Zolloc), Laura Callaghan, Kehinde Wiley, and Jason DeCaires Taylor. 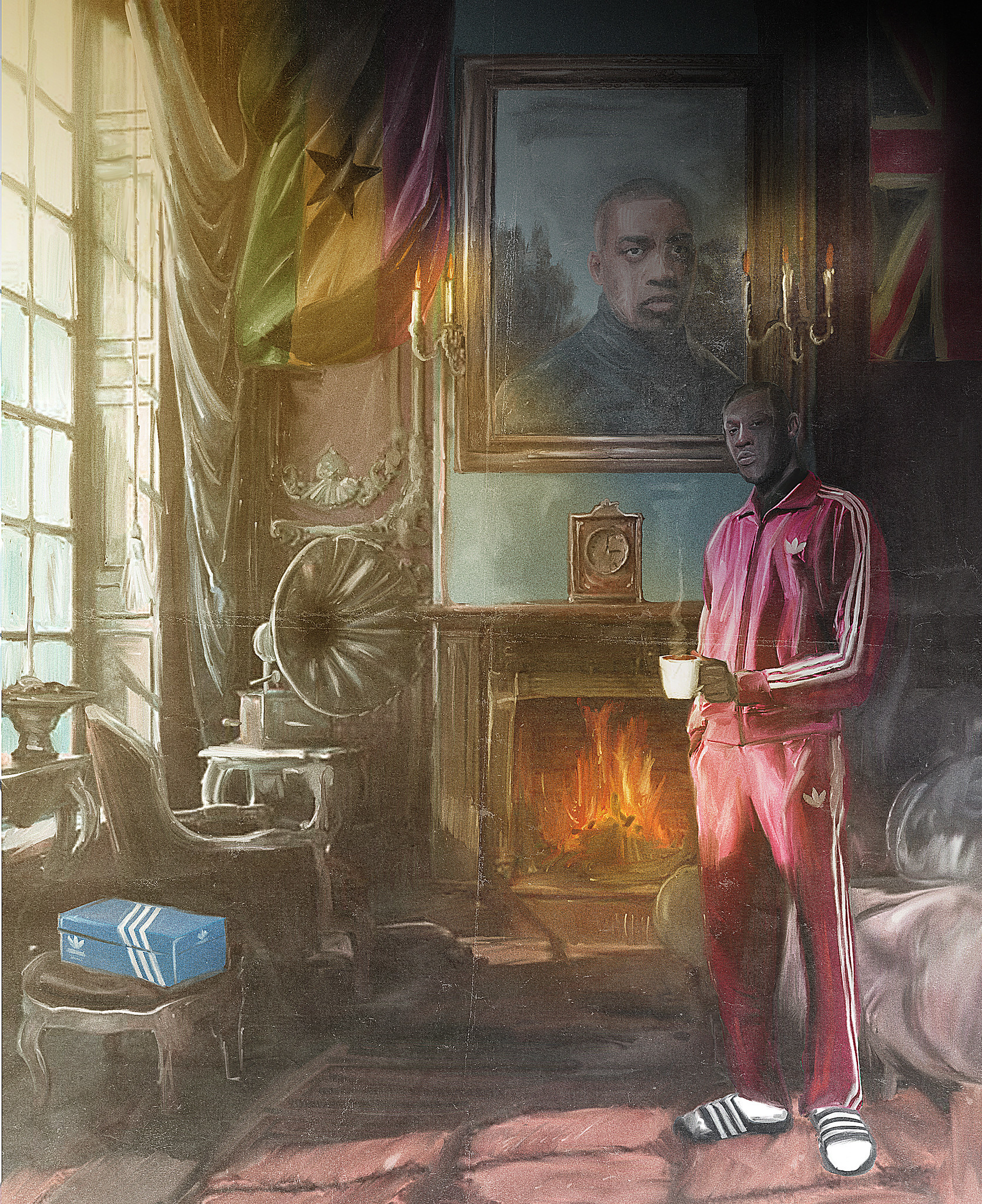 The Hubble Space Telescope was launched in 1990 by NASA , the European Space Agency, & the Space Telescope Science Institute. The telescope was named after astronomer Edwin Hubble. The telescope has captured some of the most breathtaking, clear, memorable, and detailed images of our viewable/known Universe. Hubble has an extensive portfolio which includes beautiful high definition images of stars, galaxies, and nebulae. The Hubble has helped to determine the rate of expansion of the Universe along with many other astrophysical discoveries. Here are some of my favorite images captured by Hubble, which is still in service and active presently. These images help us examine and reflect on our Universe in a variety of ways…it’s diversity, the massive expanding size & formation, and endless possibilities that are far more than science fiction. The creations that were captured by the Hubble telescope are not man-made or invented by technology…they are real, natural, extraordinary and absolutely phenomenal.

Infant Stars in Nearby Galaxy

Nucleus of Galaxy Centaurus A

This 1987 classic was a great spin-off of the Cinderella story, and this version was modernized with the delightful lyrics rapped by Kangol Crew member Dana Dane. The song is on his debut album Dana Dane with Fame on Profile Records. The song also sampled another classic dance song, ”Dazz” by Brick. One of my favorite parts of the song is when he described how his ”fairy-godfather” transformed his outfit, giving him a slick silk suit, argyle socks, a Kangol hat, and a fresh pair of Bally’s from the Bally shop. The ”Kangol Crew” included Slick Rick & Dana Dane, and the two both famously wore Bally’s and Kangol hats, which became a signature look associated with the ”Golden Era of Hip Hop”. They started performing together as a duo when they met in the Bronx, New York City. Dana Dane may have been faking his British accent (although Slick Rick was really originally from Southwest London & had a real British accent), but this song & his other classic such as ”Nightmare” are forever associated with a time & place that he helped become legendary as well.

Once upon a time, Brooklyn was the scene
In the project that they called Fort Greene
There lived a young man, Cinderfella’s his name
To make it interesting it’s me, Dana Dane
I lived in a house with my cruel step-dad
And two step-brothers who treated me bad
I cooked, I cleaned, I scrubbed the floors
And I was like an errand boy runnin’ to the stores
My brothers, they used to boast and brag:
“We’ve got fresh gear and you’ve got rags!”
Even worse than that, to make me feel low
They gave me a straw hat, while they had Kangols
Girls used to say, “Dane, you’re so cute
But you gets no rap with them polyester suits”
Well, one day, up the avenue
There was a man surrounded by the Fort Greene crew
He said, “Hear ye! Hear ye! Come one, come all!
The princess is having a royal ball
If you can rap, also dress fresh
You might win a date with the sweet princess”
Well I, um, ran home when I heard the newsflash
I bust through the door, straight to my step-dad
I said “Step-dad, may I?”
And before I could finish, “Hell no!”, he replied
My brothers were goin’, they were geared down
Even Pops was goin’ for a piece of the crown
They flaunted, they haunted, they knew what I wanted
“We can and you can’t” is what they taunted
They all stood there laughing in my face
And as they walked out they said, “Clean up this place!”

Well I shrugged, I hissed, “They’re all tryna diss
I’d get them back if I had one wish”
Before I could make my thought a phrase
There appeared a man from a puff of haze
He said, “What’s up, Dane? My name is Hurb
I’m your fairy godfather, you know it, word!
Now I’ve came here with the main purpose
Of granting you your fondest wish”
I said, “Hurb, my man, just make me fresh
And I’m sure that I can handle all the rest”
With a snap of his fingers sparks began to shoot
And I was tough and on my body: a slick silk suit
On my feet there was argyle socks
And a fresh pair of Ballys from the Bally shop
I showed him my hat and don’t you know
With a snap the hat became a Kangol
Once again his hands began to flow
Then he changed my skateboard into a Volvo
He checked me over, passed me the keys
And said, “One more thing before you leave
You must return before the stroke of twelve
Or you’ll turn back into your old self”

I jumped in the Volvo, went on my way
I got to the party ’bout ten, I’d say
It was after eleven when I rocked the mic
And by the time I left the stage the people were hyped
The princess was staring in disbelief
Reflected from her eyes were my gold teeth
She waved her hands like ‘Hello! Hi!’
Then gave another gesture like ‘Come here, guy’
I left the stage, girls came in flocks
Fists were swingin’ from the hard rocks
I heard a sound, not a tick nor tock
Gong! First bell before twelve o’clock
No time to waste, I broke out in haste
The princess followed in a futile chase
A quick steady pace is what I kept
Lost one of my Ballys on one of those steps
For the Volvo I continued my stride
About this time I heard gong five
I was down the block when I heard gong eight
And the princess scream out, “Wait! Wait! Wait! Wait!”

I was almost home when my luck ran out
And there went my suit, my Kangol and clothes
My fresh Volvo also went too
And there was no denyin’ that my night was through
The one Bally shoe the freshest thing I sported
Jumped on my board, for home I skateboarded
Made it to my pad, no time at all
Went to my room, or better yet the far wall
Hid the shoe away still feelin’ pleased
Then jumped in my cot to catch some Z’s
Early the next morning when I awoke
I threw on me old slippers and me old housecoat
Went into the front, my family stared at me
Sayin’ “Wasn’t that you?! Nah, it couldn’t be”
They kept askin’ me as I did my chores
My butt was saved by a knock on the door
“Who is it?”, that’s what my brothers barked
“The princess”, this sweet voice remarked
She said she was lookin’ for a certain man
Who could bring her the shoe like the one in her hand
The family ran around with their heads in the air
Bringin’ on shoes from everywhere
She just shook her head, a nod of relief
Sayin’ “No, that’s not the one that I’m lookin’ for, chief”
I ran in the room and got my shoe
And said, “Is this the one you’re referring to?”
Well she said, “Yes, and you’re so cute
But where’s your Kangol and slick silk suit?”
I put on the shoe, there came a flash of light
And I was tough in the gear from just last night
Looked out the window, saw the Volvo
Said to my family, “I’ve got to go”
We drove up the avenue, the princess and I
And in back of me I heard my family cry

Here are some of my favorite artworks by two remarkable artists that have contributed greatly to the art world & society alike. Whether the focus is the Harlem Renaissance, love, War, the notorious chain gang, modernist illustrations of everyday life, serene nature or self portrait/reflections…each of these artworks are truly enthralling. While Jacob Lawrence (1917-2000) was considered a modernist/social realist artist by some, Lawrence himself considered his creations ”dynamic cubism”. William H. Johnson (1901-1970) created artwork with evolving styles, ranging from realism, expressionism, and folk-style. I love how the artists’ creations have vivid colors to create realistic stories & settings in their paintings that are a part of not just African American experience, but America’s history as a whole… diverse settings/stories that real people have experienced in the 20th century. These artworks, many now on display at art museums such as the Smithsonian & Metropolitan  , are important expressions that definitely deserve continued acclaim. 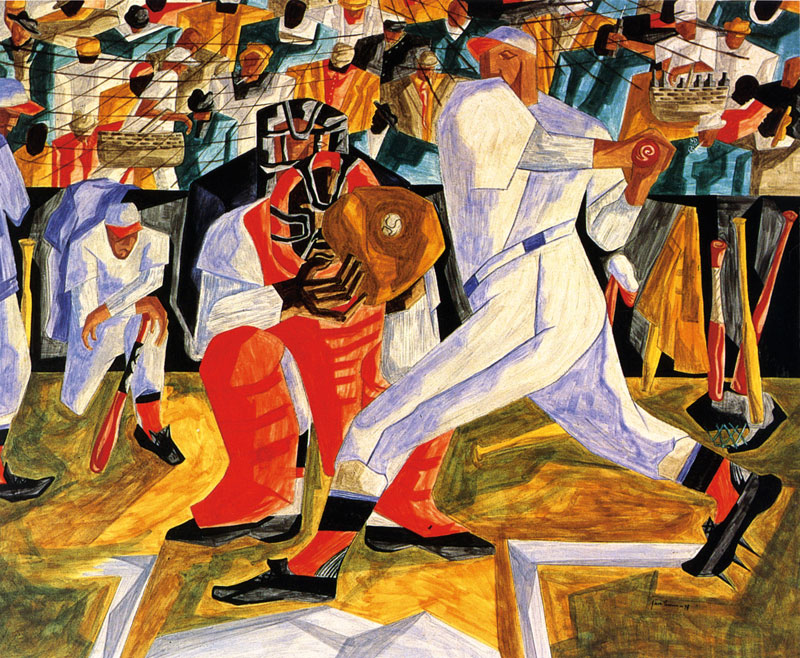 The Strike by Jacob Lawrence 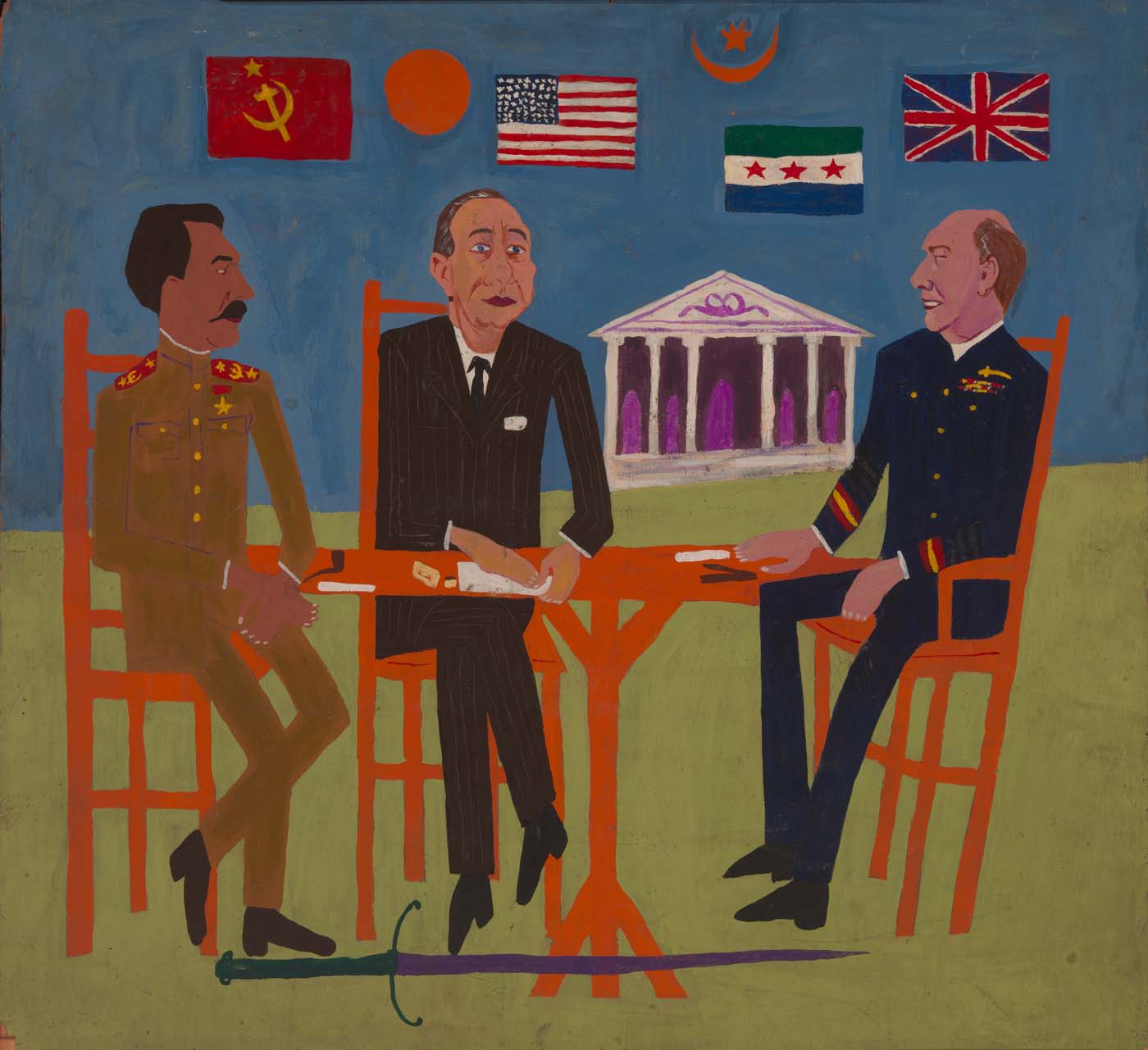 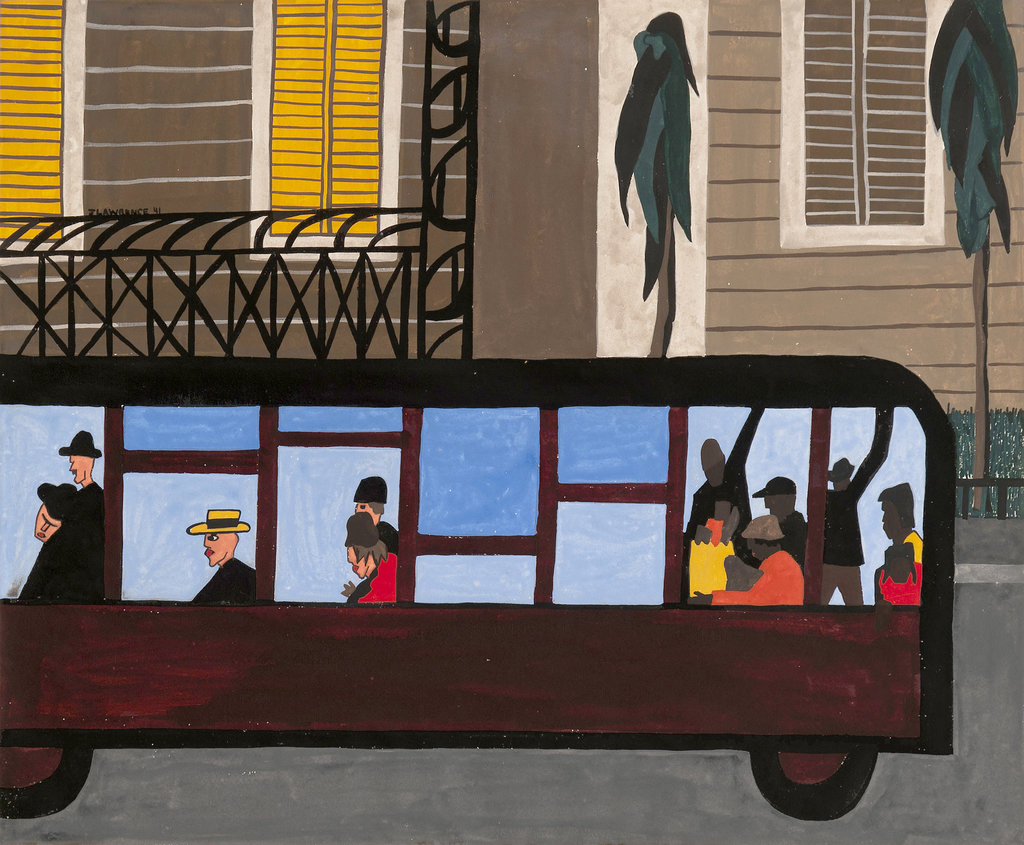 Jacob Lawrence ”The Swearing In” 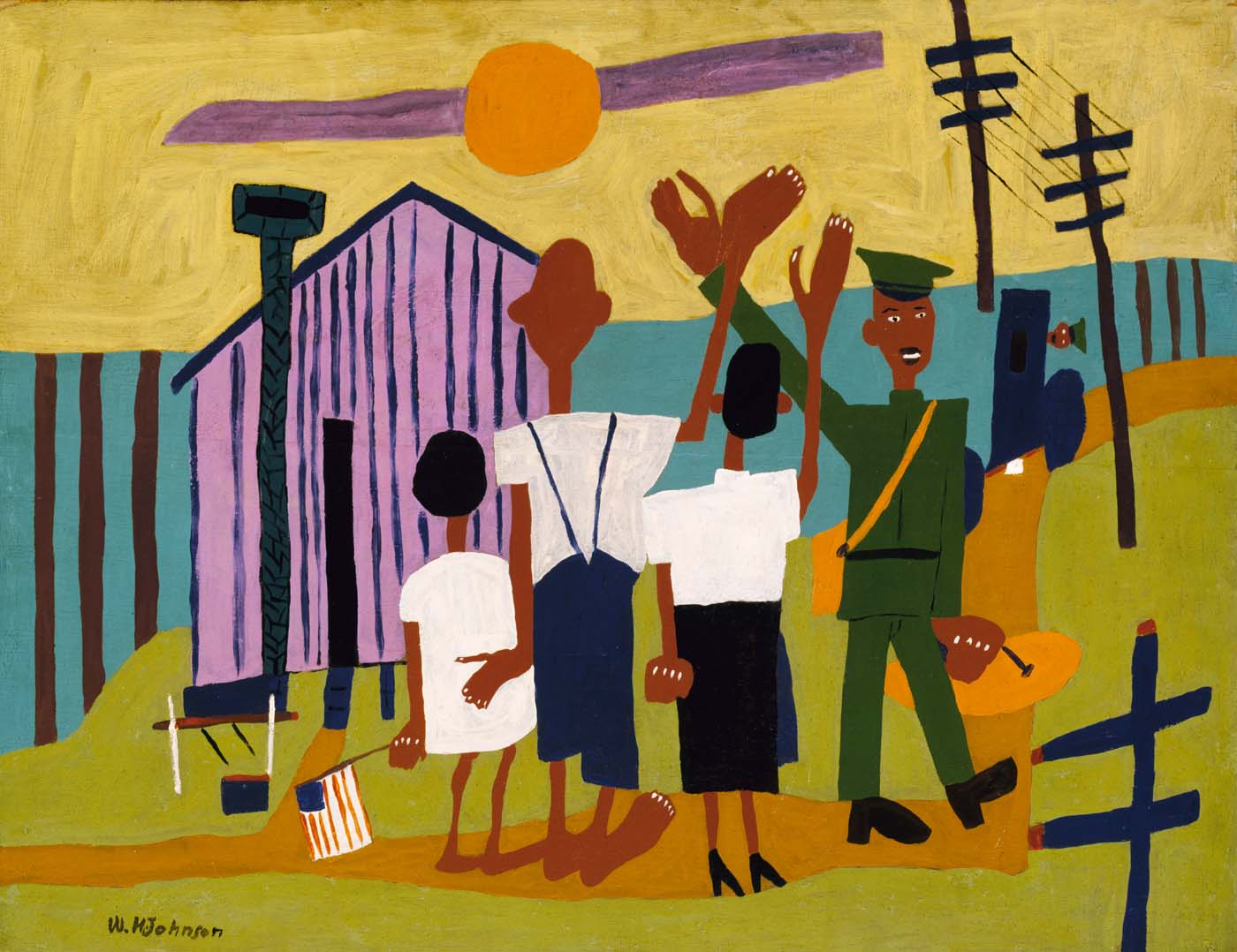 William H. Johnson ”Off to War”

The 1976 classic has a melodious, spacey, & drifting sound to it that lingers & is befitting. The lyrics are interesting to analyze as well. I use to interpret Steve Miller’s lyrics differently when I first actually started listening to the song not too long ago (I was not born when the song was first created). Now, I personally look at him as saying how he wanted to find a way to help people, ready to succeed and ”fly” during a anticipated time of fundamental change in organizational structures and/or political power. I use to think why does he want to ”fly through the revolution?”. I was looking at it as him not wanting to actually take part in helping to create new positive change. It is all how we think and interpret the use of the word ”fly” in the song.  To either take part in helping find positive solutions or wait for others to solve the problems that may be heavy and deep in our conscience. He keeps saying that ”time keeps on slipping, slipping…into the future.” The lyrics in this song may seem quite easy to explain, but it can also be analyzed and seen from different perspectives. All in all, the whole composition was well put together, and it is a song that is just as current now as it was when first created 40 years ago.

Feed the babies
Who don’t have enough to eat
Shoe the children
With no shoes on their feet
House the people
Livin’ in the street
Oh, oh, there’s a solution